Atlantic city and ocean city are two major resorts located in the USA. Both of the resorts are situated in the mid-Atlantic state.

They are quite often compared together in many tourist blogs. Because both of the resorts have many things in common.

So which one is better between Atlantic city vs ocean city?

Wanna look further into the discussion? Then read our post until the end to learn the detailed comparison.

Atlantic city and ocean city both are great touring spots with visible differences. One is more family-oriented and the other is more about partying.

The differences may remind you of lake placid and lake George in this aspect. Now, let’s take a glance at the short comparison between both cities. 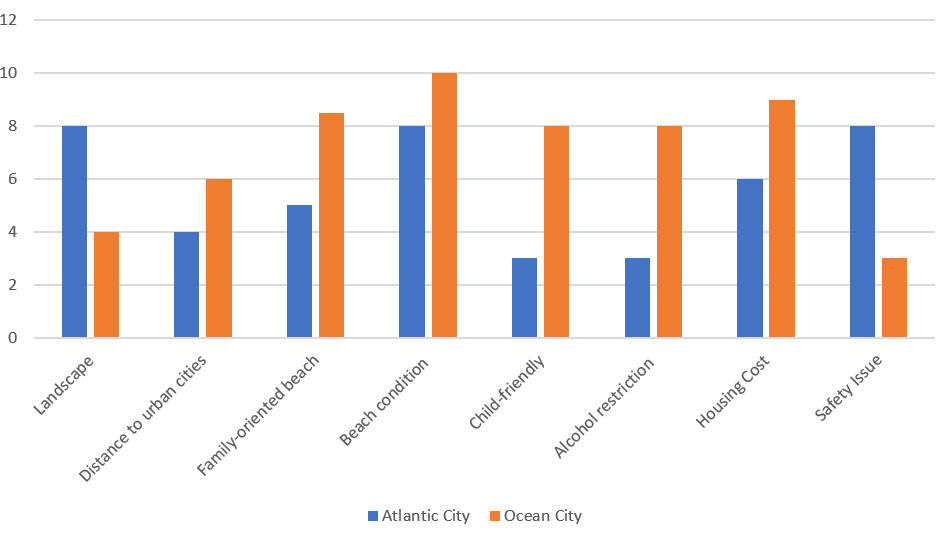 The spirit airline provides flights to and from Atlantic city to many major cities. Such as Chicago, Miami, Denver, Tampa, etc.

After landing, you can take the NJ Transit bus service to the city centre. Rental cars and taxi services are also available from the airport.

Another option is to fly to Philadelphia International Airport. It is 60 miles west of Atlantic City.

As for Ocean city, you can fly to Salisbury ocean city Wicomico Regional (SBY) airport. It’s near Salisbury and 30 minutes to the west of the ocean city.

The airport here is packed with flights from Washington, point south, Philadelphia, and Baltimore. It also handles private planes. So does the ocean city municipal (OCE) airport.

Apart from shuttles, there are taxis and rent a car available on the spot.

Atlantic city shines with luxury, glam, and debauchery. It’s almost like a less glam version of las vegas. The Atlantic city hotels certainly do live up to that image.

From offering beautiful beach views to casinos, these hotels don’t fall short in anything. Here are some of the best accommodation choices in Atlantic city-

Ocean city also has many impressive hotels to accommodate travellers of various budget ranges. Let’s take a look at the table below to see more details-

Choosing a good hotel is an important part of the tour planning. Hopefully, the list helps you decide on a hotel to your choice.

When visiting Atlantic city you wouldn’t need a guide to show you around the area. It’s one of the benefits of visiting this tourist spot. It’s very easy to get accustomed to the ways of Atlantic city.

As long as you know a few necessary pieces of information you’ll be fine by yourself. This includes the basic idea of the culture, routes, transportation system, rules, and restrictions.

The same goes for ocean city, Maryland. If you have a map and know the visiting spots, that’s all you need. No need to spend extra money on hiring travel guides.

Wanna Plan The Whole Trip Yourself?

It’s quite easy to take charge of the whole trip yourself. But first, you’d need the information about the following sections.

In Atlantic City you’ll find regular restaurants to famous food establishments by renowned chefs. Thanks to being a coastal area you can try plenty of good seafood here.

But you’d probably find any specific food you’re looking for in the area. The same can be said about Ocean city. You’ll find many renowned restaurants near the boardwalk of the ocean city.

The popular dish here is the blue crab cuisine. Most food establishments here have this item on their menu.

The most favorable way to get around Atlantic city is to go on foot. It comes with the opportunity of enjoying the Atlantic City boardwalk.

There are other options available like taxis, jitney, cycle or even victorian themed rolling chairs. Taxis are always available in front of the casinos. Similarly, you can rent bikes from bike rental services available in the city.

Another option is to get by jitneys. It’s a minibus provided by the Atlantic city jitney association. They’re available 24/7 and commute through four routes.

Jitneys have 66 stopping points. you can buy tickets from there. Rolling chairs are quite a unique and exclusive option for Atlantic city.

They represent the Victorian era vintage theme. The minimum wage for a ride would be $5. So they are a bit expensive.

Similar to Atlantic city, you’d prefer walking as a means to commute in ocean city. But you can also go around by bus, boardwalk tram, bike, or taxi.

Bus service runs 24/7 in Ocean city. The route covers from the Delaware border to the inlet. The return route is to the coastal highway and Baltimore street. They’d run every half hour and the fare is $2 per day.

The boardwalk trams are available from 7 am to late at night. They travel 27th street and  2 ½ miles-boardwalk between the inlet to pick up passengers. The fare is $3 for each ride.

Both Atlantic city and ocean city are famous for their entertainment services. Let’s take a detour at the details about them.

There are a bunch of things you can do in Atlantic City. Apart from swimming, surfing, and playing volleyball on the beach. For example-

Ocean City also has its own list of fun things to do. Here are the activities you can enjoy in ocean city Maryland-

Tours are not complete without souvenirs. They remind you of the trip or even work fine as a gift. So here’s what you can get in Atlantic city-

Souvenirs that you can bring from ocean city-

Atlantic city is a place with world-class casinos, hotels, high-end shopping malls, fine eateries, etc. There’s hardly any chance of you being bored there.

Both Atlantic city and ocean city are blessed with beautiful beaches and boardwalks. Unlike the difference between the ocean beach and pacific beach. The serenity of the ocean and the beach is already addicting.

But there is more to see than the ocean, beach, and the boardwalk. These places must be on your list when making Atlantic city tours.

Also add the names in the previous section.

Atlantic city’s nightlife is all about casinos, alcohol, parties, and nightclubs. If you’re into gambling it’s the perfect place for you to show your skill.

Places like a hard rock hotel & casino would be perfect to make a visit. There are also many renowned nightclubs and bars in Atlantic City.

To enjoy the ocean city nightlife visiting Seacrets is a must. It’s known for lovely parties, live performances, and DJ performances. They serve amazing seafood dishes and cocktails.

They also have three different stages and a nightclub with an extensive bar menu. It’s a perfect place to enjoy the night out with your friends.

It’s child and family-friendly. A trait that is missing in Atlantic city. That’s why many tourists would suggest ocean city in a heartbeat. But truthfully, it depends on what kind of adventure you’re looking for.

If you enjoy gambling and have fewer restrictions then Atlantic city would be preferable. If you wish to enjoy family-friendly and quality time then ocean city it is.

A few more information that might come in handy-

When is the best time to visit ocean city Maryland?

The best time to visit Ocean City is from May to September. The temperature might be humid and a little over the average. The crowd will be huge so be prepared mentally.

When is the best time to go to Atlantic City?

The best time to visit Atlantic City is between March and August. The weather is most suitable at that time. It’s just before the summer which means the crowd will be less. The price of the flights and hotels would also be lower than usual.

How to save money in Ocean City?

To save money on Oceanic CIty, pack your own stuff rather than renting stuff like umbrellas, towels, and boogie boards. They tend to overcharge people. Avoid buying BYOB alcohol. Because they are overpriced in most stores there.

That was all about Atlantic city vs ocean city. So which one would you pick for spending your vacation days?

Hopefully, our post was helpful enough to help you make up your mind. Don’t forget to grab a map before starting your journey.

Wishing you a happy trip!