Every time we commute from LA to San Francisco, we’re struck with that one question. “Will we take the 101 or 5?” It’s also applicable the other way around.

And for some reason, we always get confused. And cannot seem to decide on which route to take. Different people say different things.

Between 101 and 5, route 5 is fast but the drive is pretty boring. But the 101 on the other hand is longer. But it’s beside the coast so you get to enjoy the views. Aside from the views, there are tons of places you can visit here. For example, the Santa Monica Pier is here.

This is just a summary of the advantages and the disadvantages of both the routes. We’re going to dive into further details in the article.

Are you interested in learning about them? Then let’s scroll down and read the rest of the article!

There are more than enough reasons for people to compare these two routes. This is easily a matter of debate. Let’s talk about L.A. to San Francisco 101 or 5? the better route.

And why exactly won’t people compare them? These two routes have different benefits of their own.

Other than the view, there are tons of places for sightseeing. You will find plenty of places that are good for spending the night.

Route 5 from LA to San Francisco on the other hand, isn’t very scenic. There’s basically nothing to see here. You’ll basically get bored easily. Let’s just hope you don’t fall asleep out of boredom.

While we talk about route 5, you might wanna take a look at 99. If you’re traveling through California you might have to choose routes 5 and 99.

But, one plus side of  this route is that it’s much faster. The distance is less and it’s mainly a straight road. You’ll be able to get about 1.5 hours ahead with this route. That is considering you don’t take any breaks along the way.

And this is exactly why people compare. Both could be the best way to get from L.A. to San Francisco. And let’s see which routes outweigh the other considering everything.

You could have a few different reasons to use one route over the other. Let’s look at the key reasons first. It’ll be easier for us to understand the detailed explanation better. 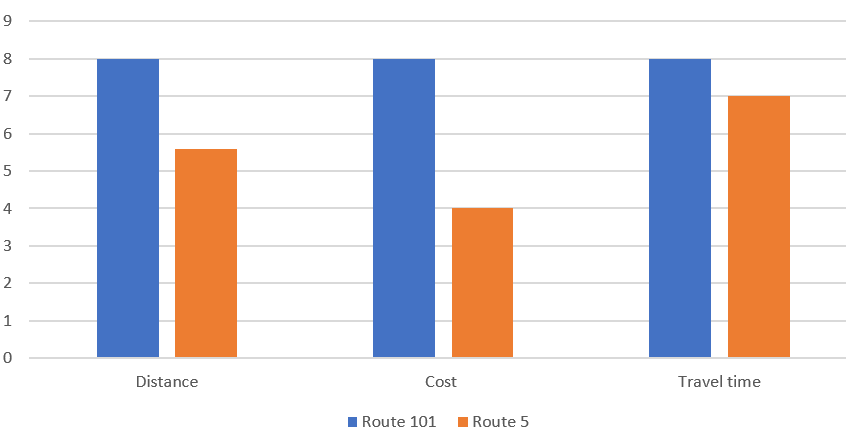 These are just the key comparisons. We’ll now talk about the differences in detail.

And since you already know these key points, it’ll be easier for you to understand.

Both routes are basically the same in terms of road type. They’re just paved roads. There’s no problem with driving in a desert or mud in the middle of the way.

The type of vehicle you should take depends on the road. Now, your road is the same on both routes. This means that you can use a similar type of vehicle.

It doesn’t matter if you’re taking a sedan or an SUV, the result will be the same.

LA to San Francisco road trip time of a route doesn’t depend only on the distance. There are factors that can affect the time no matter the distance.

The distance from LA to San Francisco on route 101 is 430 miles.

And the distance from LA to San Francisco on route 5 is 382 miles. It doesn’t end there though.

Route 5 is more of a linear path. So it’s easier to drive on. You could say boring actually. Route 101 on the other hand, has some twists and turns to make your journey more interesting.

So, not only is route 5 shorter, it’s easier to drive on too.

You’ll be delighted to know that there are no toll booths on either of the routes. Toll booths can be a major reason for your journey to slow down.

At busier toll booths you’ll waste plenty of minutes there. But since none of the routes have them, the ride will be smoother.

In terms of traffic though, route 101 is slightly busy. On days when there’s usual traffic, it might take you up to 10 hours to travel.

There’s not much traffic on route 5 though. At least not enough to hamper your travel time.

Now one other thing that could be a major factor is the weather. Throughout the year you won’t face any problems on route 5.

But as soon as the fog of winter starts engulfing the roads, it’ll get harder. In this dense fog, it’s difficult to see even a few meters in front of you.

Remember, you won’t have problems throughout the year. It’s just the winter when you’ll face a bit of a problem.

When it comes to the 101, the weather does not affect it much. Doesn’t really matter what season it is, it’s clear throughout the year on route 101.

Now, let’s compare the distances to a flight. So how far is LA to San Francisco by plane? The minimum distance connecting San Francisco and Los Angeles by air is 347.42 miles.

Now let’s talk about the amenities available on both routes. This is mainly for people who want to explore along the way.

Let’s talk about the number of gas stations first. Don’t worry about that one bit. There is plenty for you to refill your gas anytime you’re running low. As well as take some spare gas with you.

And this case is the same for both 101 and 5. Do you have an electric car? Don’t worry.  There are quite a few places where you can charge your car and relax for a bit.

The next thing we can talk about is the number of places you can visit for sightseeing. To be honest, 101 has far more to offer than i-5 here.

But there are some pretty good places on the i-5. There are wildlife areas and natural reserves where you can go for a picnic. You can let the kids and the dog run along and free themselves for a bit.

There’s a Fort Tejon on the way. Here you’ll get to enjoy local history.

Now let’s talk about route 101. You’ll find quite a few towns while traveling through this route. If you were to visit every single one of them, it’ll take you months.

Malibu is the first town that’ll fall along the way. You’ll get to experience the town, Pepperdine University, and some beaches.

If you’re in a hurry though, you won’t be able to visit it in peace. Make sure to have some free time if you’re going there.

Moving on, you’ll find Santa Barbara. There are a lot of plantations and beaches here.

There’s a tiny community called the La Conchita. You’ll see banana trees in the backyards of many households. There was a banana plantation there.

But most of the trees died after a freeze. And now a lot of those dead ones are replaced with avocados.

There are countless places you can visit along the way. Basically, the 101 is a scenic route.

If you’re planning on staying anywhere, you can easily find a place. If you want good and budget-friendly, go for Comfort Inn or Quality Inn.

I don’t there’s anything to say about the food on 101. You can already understand that you can find almost anything along this route.

As for route 5, you can find plenty of decent places to have food. Starting from tacos to steaks, you’ll get almost anything here.

If you’re not going to make any detours then your only cost will be gas. And food if you stop for food breaks.

Gas currently costs  $4.16. And you know the distance of both routes. Do the math with your car’s mileage and you’ll know the answer.

But you don’t actually have to do the math to know where it costs more.

If you’re going to do some sightseeing, you’ll have more expenses. Carry money that way.

Both the routes have their specific aesthetics. Their aesthetics set them apart from each other.

Both the routes are mostly scenic views. The routes lack urban landscapes. There are a few towns and cities along the way. But it’s mostly scenic.

But when it comes to scenery only Route 101 is more scenic than the I-5.

There are quite a few landmarks and monuments along the way for both routes.

And for route 101 the most notable is the San Monica Pier. You’ll also find the Santa Barbara beaches, La Conchita plantation, and the Gilroy Shoppe.

Which Route is Better for Social Media

If you are aiming for more reactions to your social media then 101 is your go.

Compared to the I-5 there are far more scenic sites, restaurants and landmarks. This will surely put a lot of reactions to your social media handles.

If Something Goes Wrong

Now, what happens when something goes wrong?

You never know when you might face an accident. It can never harm you to stay cautious.

Both the routes are pretty safe. There are police cars patrolling the routes every hour. And you can easily reach 911 in case of an emergency.

You should choose the route that suits your taste.

Route 5 is one of the fastest route from Los Angeles to San Francisco. So, for faster travel, you can choose this route.

On the other hand, route 101 takes more time to arrive in San Francisco. But route 101 is a scenic road. You’ll enjoy the drive.

Considering your car’s mileage, route 101 could be a little more expensive. As the route is longer, you’ll need more gas.

We’ve curated some of the most frequently asked questions for your consideration.

Can you take highway 1 to travel from L.A to San Francisco?

Yes, you can take Highway 1 to travel from LA to San Francisco. Highway 1 takes around 8.5-9 hours to get from Los Angeles to San Francisco without stopping. Keep in mind that this is not a motorway with a speed limit of 55 mph. For around 95 miles, your average pace will be around 35 MPH.

Which town marks the halfway point between San Francisco and Los Angeles?

By train, how much time does it take to get from Los Angeles to San Francisco?

This is all you need to know about LA to San Francisco 101 or 5. We hope you were able to get all the information you needed.

Remember, the faster route is the i-5. The 101 is the scenic route.